There was a party atmosphere on the Zattere waterfront in Venice yesterday afternoon. Stilt-walkers and people in Carnival costumes gathered around, along with Venetians of all ages clad in their dark winter coats. Chatting with friends, stopping on their walk, accompanied by their little dogs. There was music, mulled wine and a convivial atmosphere. 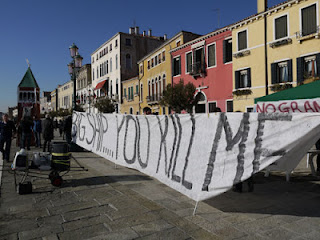 But there was a serious theme underlying the Carnival gathering. This was a demonstration, one of many planned for this year, against the giant, monstrous cruise ships churning up the waters in central Venice. A stall manned by volunteers handed out information leaflets detailing the damage these ships are doing to Venice's historic buildings and to the fragile eco-system of the town's lagoon.

The numbers of huge cruise ships is growing each year, and so is the size of the vessels. Some days in Venice, with six or seven cruise liners moored close to the town centre, 30,000 people may spill off their cruise ships, filling up the narrow lanes of the ancient town. 2 million cruise ship passengers visited Venice in 2011. This is in addition to the tens of thousands who arrive for the day by train and coach. Venice has a population of under 60,000, which gives you an idea of the impact this daily invasion has. Occasionally the ships are even moored in front of residents' homes. 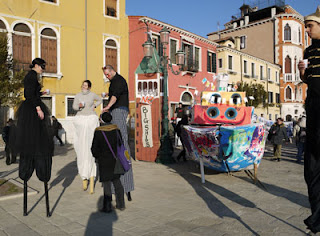 The excesses of tourism which turn Venice into a Disneyland - picnicked on, shambled through, littered then abandoned by evening - are a major problem. At present these protestors are not addressing this complex issue, but focussing on a simple one: the presence of ships in the lagoon. They are not even asking that ships stay away from Venice, just that they moor in the sea outside the lagoon.

Local politicians and government ministers have been warned by UNESCO and have accepted  there is a serious threat to Venice from cruise ships, and the current project is to build a vast new canal, deep enough for these monsters of the deep, right through the southern lagoon, giving them a new route to their moorings in western Venice. This would prevent them cruising through the city canals and keep them away from the sensitive waterfront of  St. Mark's, but it would obviously take a long time and cause further immense damage to the lagoon environment. What residents would prefer is for the ships to dock in the sea outside the lagoon, and to ferry their passengers in by smaller boat. 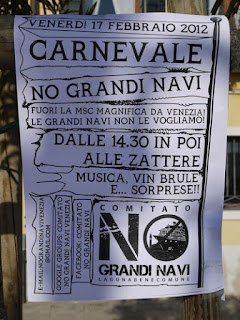 Many times I've walked along the waterfront in Venice as a cruise ship is passing by, its cheesy music and commentary jangling out, its movement causing the stone paving to shake underfoot, and heard tourists saying in horror 'It's just not right!' or words to the same effect. If you see a cruise ship sailing past the heart of Venice, you will understand immediately how wrong it is, even without knowing the physical damage they are doing. The ships are totally disproportionate to Venice's scale, and it is patently demeaning to a great art city to have these floating palaces looming overhead, passengers peering down at the monuments as they sail out of town - often with minimal contribution to the city and not having had the time to appreciate it.

At the demonstration yesterday we were waiting for the cruise liner MSC Magnifica to leave town. The Comitato No Grandi Navi (No big ships) has vowed to greet every ship's arrival and departure with banners and protest. Despite the costumes and mulled wine, as the ship began to move, its delayed departure failing to daunt the crowd, the mood darkened. 'It's moving! It's coming!'. Sirens wailed and whistles blared. A protestor with a megaphone shouted out the statistics, detailing the damage and sheer consumption of the ship. 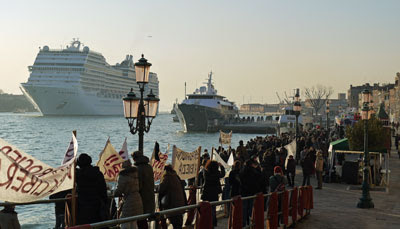 There were at least a hundred protestors, despite the fact it was a working day, but the cluster on the waterfront seemed pitifully small compared with the might of the ship, carrying thousands off for their low-cost winter cruise.  Thanks to the megaphone and banners, though, the Venetians made themselves heard. One or two of the passengers lining the rails waved hopefully, then as the message they were hearing sunk in, they stood like silent little dark shapes, thousands of them, high above us, watching. 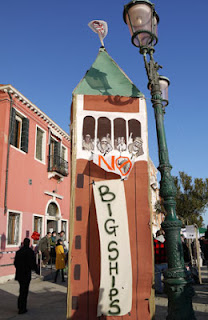 In Italian and English the message was clear: "You are too big for this city. Go away. You are destroying this city. Destroying palaces, destroying homes. It's not a postcard, it's a town." Some protestors just stood, others raised their hands in the classic Italian 'cornuto' gesture of hostility. The two largest banners read: "Grandi navi fuori della laguna" (Big ships out of the lagoon) and "Big ship you kill me". There were chants of "Fuori, fuori" (out, out).

As the ship sailed out, past St. Mark's, heading for its next port, the little knot of residents began shifting, shaking hands and preparing to move on. The stilt-walkers picked up their chariot - a large cardboard boat - and prepared for a procession through the city, handing out leaflets and raising awareness of their campaign.


Earlier this winter I wondered if this would be the year that Venice rose up against the impositions and damage caused by excessive smash-and-grab tourism and by the crippling weight of cruise liners. There is a groundswell of opinion stirring, but with fewer residents each year, and lots of money at stake for a powerful minority, it may be too late to save the city from becoming a Disneyland. I found it heartening, and very touching, to see this humble stand against one of the most damaging influences on Venice. The recent disaster off the island of Giglio has been in everyone's mind - there was a protestor dressed as Captain Schettino - along with reflections on what would happen if one of these ships were to veer off course in Venice. The residents may, in this one matter, have their way, though frankly it's hard to see any  satisfactory solution in the foreseeable future.

In the meantime, while port authorities, politicians and the cruise industry debate, the residents of Venice have pledged to keep up their campaign. So if you are planning to cruise through Venice this year, expect to see banners and protests. It's not personal. Just a group of people wanting to save their home and preserve its heritage. If you, too, love Venice, you can read more, follow the latest news and keep up to date at the following websites:
> http://www.facebook.com/comitatonograndinavi?sk=wall
> UNESCO calls for restrictions on cruise line traffic in Venice following Costa Concordia disaster
> Venice in Environmental Peril - Dominic Standish's blog