No food from BA 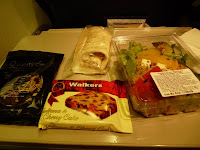 As usual, I was quite appreciative of the vegetarian sandwiches offered by BA on my flight from London to Venice last night. Now I learn that the nervous airline is to scrap food on flights after 10am lasting less than two and a half hours - in other words, many of their UK to Italy flights. It sounds as though drinks and tiny snacks are still on offer... although there have already been reports suggesting that free alcohol, too, is under threat.

Bizarrely, BA doesn't appear to be offering the option to buy food, either - so if you board without a stash of food in your hand luggage, you're doomed to two hours of hunger.

Although BA are obviously desperate to save money, this seems rather counter-productive to me. Those of us who choose BA over budget airlines do so because of the relative 'luxury' on offer. Flying Venice - London, BA flights generally cost slightly more than Ryanair. Factoring in the more convenient airports, the generous baggage allowance and the calm atmosphere make BA competitive. For those of us used to Easyjet and Ryanair, being brought free food and drink in our seats seems both convenient and decadent. Without that extra perk, the budget airlines might start to seem a better option again.

Flights affected are likely to include services from London to Venice, Milan and Rome (2 hours 25 minutes). On a recent flight from Catania (3 hours 25 mins), I was impressed by the mini-meal I received (photographed). Obviously this length journey rated above the simple sandwich option but below a hot meal. The simple 'wrap' sandwich, I noted, contained 40 different ingredients including 10 E-numbers.

BA's stinginess starts on Monday, so I'll have to remember to fill up on cheap pasta at Marco Polo Airport before boarding my return flight to London.
1 comment:

The Dolomites are UNESCO listed

A couple of weeks ago UNESCO added another location to Italy's impressive tally of World Heritage Sites: the Dolomites. This mountain range in northern Italy is only the second listing for Italy in the 'natural' category, with 42 'cultural' entries. You can read more about the Dolomites on the main website. Two other UNESCO sites which I've recently added to Italy Heaven are Paestum (Greek temples) and the volcanic Aeolian Islands (Italy's other 'natural' listing)
> Full UNESCO list for Italy, with links to articles
No comments: