This afternoon I made a brief trip to Forte Marghera, a 19th-century fort constructed by the Austrian and the French rulers of Venice on the mainland edge of the lagoon nearest to Venice.  Built to defend the city from assaults from the land, it was a heavily armed and carefully engineered island fortress, built to an angular design and protected by a network of canals. It's a strange and crumbling arena of grass, trees, scrub and old military buildings, some falling apart and others restored. You can walk right through, across the double ring of 'moats' and out to the lagoonward side of the central island, where you'll find a landing stage, majestic abandoned brick buildings and places to sit. 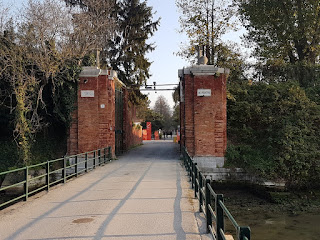 A range of varied enterprises are undertaken here, from start-ups to art centres. On the outer ring, on the landward side, are a few rough-and-ready bars and places to eat, with indoor and outdoor seating. In summer this is a very popular destination for an evening out; apparently it gets rammed with people eating and drinking in these unusual out-of-town surroundings. Given the leafy lagoon environment, I can't even begin to imagine how filled with mosquitoes the air must be on summer evenings. When I visited this late autumn afternoon there were just a few people around: some workers, one or two patrons and employees at the bars, a man moving bales of hay, a tractor carrying giant bins across to the mainland. By the scenic outer shore a man sat gazing at the reflections on the still water, and a cluster of teenagers drank and listened to music. A pair of rowers, standing-up Venetian style, were manoeuvring their boat offshore. 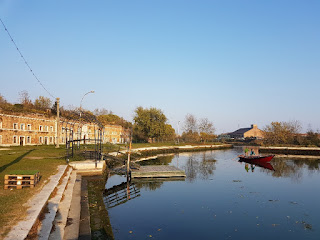 I think there were more cats than people. Lots of strays live here, lurking waiting for feeding time or  following their favoured human around. I passed an animal protection HQ with posters advertising adoptee cats, and a hopeful cat sitting on the doorstep. 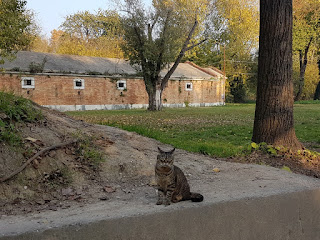 There isn't much in the way of information available about the various historic buildings and their uses. Some look as though they were barracks, others probably powder stores. A guided tour would probably be fascinating. There's a military museum here, according to a sign at the entrance, open occasionally. As part of an initiative to spread Venice's museum holdings around the lagoon, one draughty old storeroom currently houses a collection of sculptures from Ca' Pesaro in Venice (due to close soon). I had no idea these were here, and it was an atmospheric way to view works of art, alone in this barren reclaimed space with windows and doors open to the green surroundings of the fort. 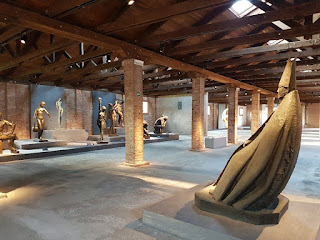 It's an easy and unusual trip from Venice. Catch tram T1 from Piazzale Roma and travel two stops. The stop is called Forte Marghera. After alighting, cross the road and a few yards to the right you'll find a gravelled footpath leading across a short stretch of countryside.  A few minutes later you come to another road. Cross carefully at the pedestrian crossing. The access lane to Forte Marghera lies ahead, signposted. From its description I did fear this might be a creepy excursion alone, but I didn't encounter any problems and there were a reasonable number of people around. 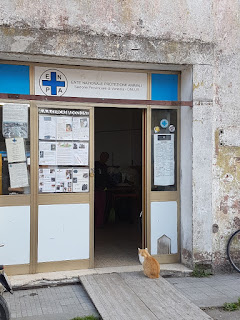 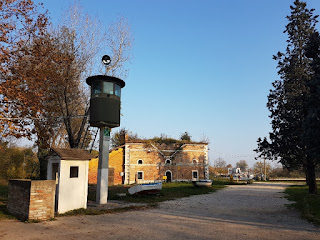 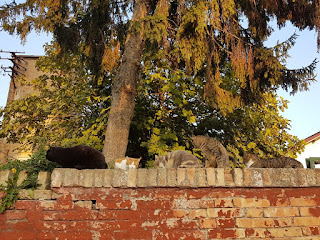