Violence, terror and the fiery wrath of the planet - yesterday's explosions prompt the question of why humans are drawn to volcano tourism 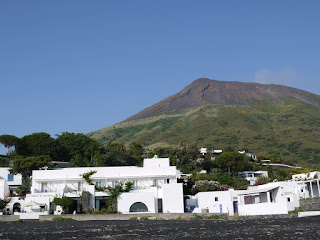 Our boat was one of several bobbing up and down in the twilight offshore from the great grey scar which runs down the flank of Stromboli, the Sciara del Fuoco. It was ten years ago, and I was visiting the Aeolian islands for the first time. Most of the passengers on the open top deck had their cameras out, pointed upwards into the gloom. The wait seemed a long one, maybe a quarter of an hour. The Italian man in front of me began exhorting the volcano: 'Come on, Stromboli, come ON.' Then, what we had all been waiting for: a flash of red high up on the mountainside, the night illuminated by a fountain of fire. Glowing bombs ejected from the crater crashed onto the Sciara del Fuoco, then bounced down towards the sea in a cascade of dust ending in small splashes close to the shore.

There were cheers and celebrations from the ecstatic passengers. I think there was even applause. We waited there for another firework display. The crew handed around little plastic beakers of the sweet Aeolian island wine, Malvasia. We all toasted the volcano. Then it was time for home, and the small fleet of tourist boats switched on their engines and ploughed across the moonlit sea towards their respective island harbours. It was one of the strangest tourist experiences I've ever encountered.

Since that first visit I've returned to Stromboli and stayed on the island a couple of times. It is a very strange, unique place, its slopes green with vegetation, yellow with flowers, and grey-black with lava. The black sand beaches, the blindingly white houses, the shockingly colourful blooms cascading over walls, the blue, blue Sicilian sky and sea and then the great slopes of the volcano overhead make a vivid and compelling picture. I explored a cave by the sea said to be the home of the mythical ruler of winds, Aeolus. Stromboli has been the lighthouse of the Mediterranean for millennia; this is an elemental place where myth and superstition are always close at hand. On the cliffs above are some of the island's most expensive homes, coolly whitewashed villas behind discreet bougainvillea-covered walls. Italy's former president used to spend summers here, and villa owners include designers Dolce and Gabbana. There is something about the island's contrasts, its extremes, which lures visitors like a siren's song. The primitive, and the sophisticated, the elemental and the artificial inhabiting the same sun-heated space. Vehicle traffic is minimal on the island, and the nights are dark, and quiet. Yet high above the craters of this active volcano are sending their fireworks heavenward several times every hour.

The craters and eruptions can't be seen from the main settlement on the island, which is in the safest location it can be, given it is on an actively erupting volcano. But it is impossible to be unaware of the dangers, ever. There are signs posting to evacuation areas, places of hopeful refuge above sea level, a helicopter landing pad.

It says something about human nature and our relationship with the elements that Stromboli is the great tourist attraction of the area. Every day boats chug across the sea bringing tourists in their hundreds from the other Aeolian islands, Sicily and mainland Italy, all heading towards an active volcano to get as close to eruptions as they can. Souvenirs here are blazoned with images of the volcano; posters offer crater excursions, hiking gear hire, and boat trips to the Sciara del Fuoco. Every afternoon scores of tourists assemble by the church in walking kit to be led by guides up the steep mountainside to a viewpoint above the active craters where they will watch the volcano spitting fire at dusk.

As well as from the sea, I've viewed the eruptions from a pizzeria (read on to find out more) and even been lucky enough during a BA night flight to see the dull red bloom of Stromboli erupting below. The nearest I've got to the eruptions was last year, when I set off on a solo volcano exploration. The route up to the craters is out of bounds unless you're climbing with an official guide, but a lower-level footpath offers a safer and less demanding excursion. I trekked up the beginning of the crater route, somewhat surprised to find that there were no obvious signs nor barricades marking the branch-off for the main ascent. Presumably this is to make it harder for reckless tourists attempting to climb alone. Only a gap in the undergrowth and marks in the dry earth from hundreds of booted feet betrayed the route taken by the afternoon's parties. I continued along my contouring path. I had not yet encountered a soul when I found myself in an eerie overgrown graveyard. High above the village, this cemetery may have been abandoned, I speculated, after eruptions in the 1930s led to a depopulation and a general move towards the 'security' of the main settlement. It was an evocative spot, and a sobering moment of realisation that I was completely alone, on the slopes of an active volcano, in this strange world.

The path wound on, dipping into gullies and climbing ridges. I overtook a few other hikers, including some Germans carefully photographing a giant caper plant. Twilight was getting nearer when I began to hear, intermittently, a low dull boom. It took me a while to realise that this must be the grumblings of the volcano. I was nearing the slopes beneath the active craters. The picturesque footpath emerged onto a paved mule path running up in zigzags alongside the great ashy Sciara del Fuoco. I climbed a short way, to a bend in the path which doubled as a viewpoint. A 14-strong English tour group were gathered with their guide. We all waited for the next burst of fire. Dusk was falling, and my blouse, soaked with sweat after the hike, began to chill me. A black puff emerged from a crater above. Cameras clicked and cheeped. Although there was still some light, enough to see the islands of Salina, Alicudi and Filicudi looking romantic in the misty sunset distance, the next eruption, a dramatic one, had red lava visible in its heart. As it died away, the debris scattering down the slope before us, the tour group turned their backs and began the descent. They were unlucky; as soon as they'd disappeared down the track a much bigger eruption set the remaining onlookers gasping. It was accompanied by the booming I'd heard earlier. Between the path and the main slope of the Sciara del Fuoco, I saw a goat grazing on a patch of grass among the rocks, impervious.

In one of the island's bizarre juxtapositions, eruption-viewing is often combined with pizza-eating. Far below, on the slope between this viewpoint and sea, looking over the Sciara del Fuoco, was the old volcano observatory now turned into a pizzeria, L'Osservatorio. And I had a booking. I strode down the long zigzag path at a liberating speed, and before too long I was seated with my vegetarian pizza and a glass of wine, watching and waiting for the next fiery explosion.

As night falls, one of Stromboli's other spectacles is presented to the diners at L'Osservatorio. The red eruptions high above are accompanied by small white fireworks, the camera flashes of the hiking groups on the high-level excursions. Once they've seen and photographed, the guides lead them rapidly down the slopes, a necklace of bobbing white head-torches marking out the zigzags of the path, a decorative illlustration of the bizarre sport of volcano tourism.

I walked back into the village alone, along a track that was even dustier than I remembered, following my torchlight between the tall reeds which cover these lower slopes. Emerging into the settlement, my way led along a pedestrian lane between the exclusive white villas of the Piscità district, past the unseen cave of Aeolus and back to my white-painted hotel facing over a black beach.

Next day, before leaving this strange and intimidating island, I took a boat trip to Ginostra, a picturesque hamlet in romantic isolation on the far side of the volcano. There are no vehicles here, and not many visitors. The handful of residents have been complaining this year about the state of their small harbour and questioning its suitability for any necessary evacuations. Yesterday, fiery bombs from the volcano's big explosion were reportedly falling on this end-of-the-world settlement, and setting the vegetation above on fire. News reports said that residents and tourists had barricaded themselves into houses, or taken to the sea in search of safety. Last year, when I visited, the only real reminders of the volcano were the steep slopes above and the abundant fertility of the orchard and allotments, and the only sound was the wind in the olive trees.

'Iddu', islanders call Stromboli. 'Him'. The volcano is a unique, elemental place: harsh but beautiful. The vivid island colours are underpinned by black volcanic lava, and its peace rests on the rumblings of volcanic activity. Looking at the larger picture, there are at least two or three volcanoes in Italy thought to represent a greater threat, but Stromboli's continual rumbling and spitting means that here the menace feels ever present. And news coverage of yesterday's eruption will have added to the volcano's formidable reputation. Edgy and exclusive at the same time, it's a holiday destination where visitors can get away from it all while at the same time risking everything. During my first visit, I couldn't understand why anyone would want to stay in such a manifestly dangerous place, own a holiday home, live here. But after spending more time on the island, I began to understand its strange, alarming appeal. Perhaps Stromboli offers something different to each of its visitors: gamblers, thrill-seekers, adventurers and existentialists. If you want to stare into the void and face up to the frailty of human existence in the face of, depending on your creed, the gods, or Nature, or Fate, there could hardly be a more fitting place. 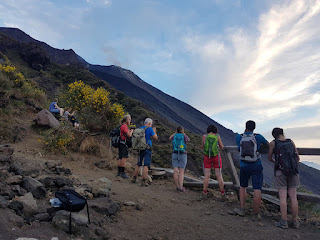 On a practical note, assuming the volcanic activity settles into its typical pattern after yesterday's explosions, Stromboli can be a great place to visit - but be aware of the dangers. A good book for volcano visitors is The Volcano Adventure Guide (2005) by Rosaly Lopes https://www.amazon.co.uk/Volcano-Adventure-Guide-Rosaly-Lopes/dp/0521554535. There is always a certain level of risk, particularly for visitors who climb to the craters, which must only be done with a guide (hard hats or helmets are obligatory). And as this is an active volcano there is the possibility of larger explosions, like that of July 2019, and accompanying hazards like tidal waves and earthquakes. The volcano is monitored, the summit is closed off during periods of increased activity – which is very bad for tourism – and in theory there are evacuation plans. However none of this can guarantee security, and the most recent explosions were unpredicted.

I stay at the Sirenetta Park Hotel, a white-painted and welcoming complex with a swimming pool and a black beach right outside. I'd recommend an evening meal at L'Osservatorio, for the view of the eruptions rather than for the food. Aubergine arancini from Nonna Antonia in the village centre make a great snack or light lunch. 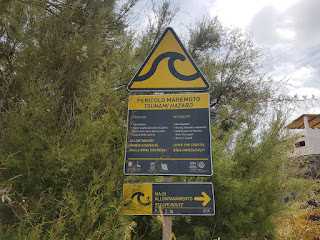 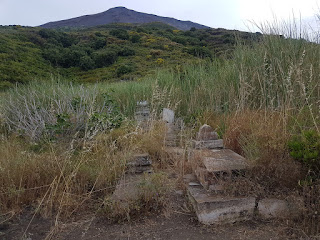 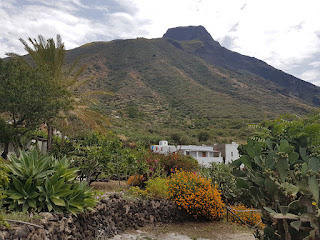 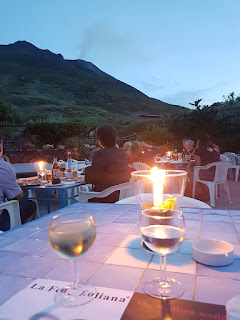 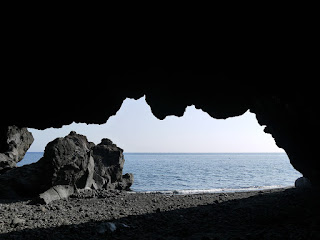 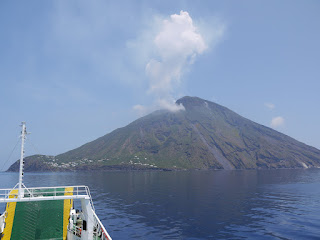