One of the big issues in Venice in the last two months has been the appearance of Romanian child pickpockets – the sort you'll have seen in Rome and other Italian cities if you have travelled around Italy in recent years. Under 14 years of age, these children cannot be held accountable for their crimes by local law. They're picked up by police, taken to child refuges, then they abscond in the morning. Some of the children are stopped by carabinieri and fed-up local vigilantes and shopkeepers on a daily basis, but the rewards are great and they keep on robbing.

Tourists should always be careful in crowded places and should keep bags firmly fastened and under their control at all times. Be streetwise – Venice is a very safe town but pickpocketing is one thing you should look out for. Favourite places for the robbers include busy lanes and bridges, the bus terminus at Piazzale Roma, the St. Mark's area and rush-hour waterbuses. Don't be lulled into a false sense of security if the only people near you are ten-year-olds or heavily-pregnant girls; these are classic examples of the pickpockets sent out by Fagin-like operators. In the last week the newspaper has reported children as young as 5 being employed in crime. Be very aware of people falling in behind you in a queue, especially if you are being jostled. Shout loudly and attract attention if someone attempts to rob you.

Since writing this it nearly happened to me! On Sunday in Dorsoduro I was crossing a bridge when I became aware of a young girl moving in close behind me, on the side where I carried my shoulder bag. Although I didn't see her or her companion, a slightly older boy, actually rob anyone, it was clear that this was their game. They would choose a position on a bridge, watch as tourists walked by, then the girl would begin to follow the tourists down alleys as the boy kept a look out. When they realised I was watching them they moved off. I would guess that she was about 11 years old, and the boy was perhaps 13. Stay alert!
No comments: 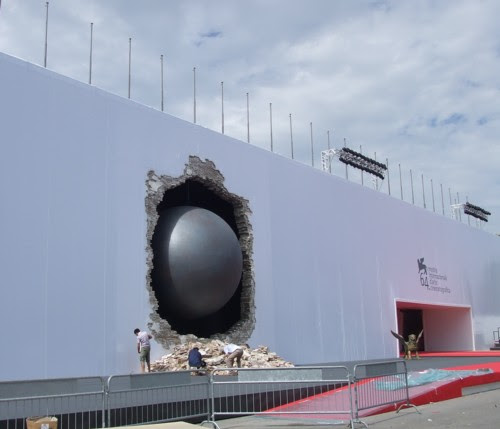 > Venice Film Festival 2007 (our article)
> The Telegraph's section on the festival
> Biennale Cinema - the official website
No comments:

UK travellers will be interested in an article from The Times which revealed the cheaper prices available for British Airways flights if you book them through US websites. As an example they found prices for flights between Rome and London which were cheaper than those on BA's official UK website.
> Cheap flights via US websites (The Times)
No comments:

After 11 years of controversy, Venice's new bridge -only the fourth bridge over the Grand Canal - is due to open this winter. The 'Ponte di Calatrava' as it is currently known (its final official name has yet to be decided) was designed by Spanish architect Santiago Calatrava and crosses the Grand Canal at its busy entrance alongside Piazzale Roma.

Major issues of contention have included the lack of disabled provision, and the over-budget expenditure of public funds. The location is hotly debated too. There have been three bridges over the Grand Canal since the early twentieth century, and there are certainly big gaps between them where an extra crossing might be convenient. But this new bridge is very close to the existing Ponte degli Scalzi, and it is hard to see what additional function it can contribute. It links rather more directly the bus terminal at Piazzale Roma and the railway station. But it's hard to see who'd want to race from one to the other; they are both at the end of the same route over the lagoon and so no-one would need to change from bus to train.

Anyway, the Travelling Blonde watched the side sections of the bridge arrive in Venice a week and a half ago - a major operation since they had to be transported up the Grand Canal overnight, around bends and under the existing bridges. Venetians and surprised tourists crowded the canalside to watch the big transport barge manoeuvring, which all went incredibly smoothly. There were some protests and some cheers as it squeezed under the Rialto Bridge, and a lot of applause for the workers who managed the tricky feat. Last night was the big date for the arrival of the central part of the new bridge, which also seems to have been transported without causing any harm along the way.