Aromas of Rome: scent and memory, from perfume shop to stadium

Earlier in this year of lockdowns I opened a new bar of Nesti Dante soap named 'Roma'. With an image of the Colosseum on the wrapping, it was designed to evoke the Eternal City, its scents oleander, zibbibo grapevines and fig. It started me thinking about the scents that say 'Rome' to me, the smells I remember from living in the city and the perfumes that can transport me back to Rome when I'm far away. 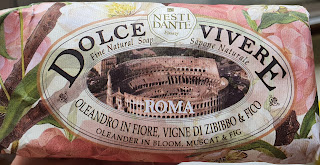 One particular aroma came back into my mind a while ago. In a secretive, elegant French perfume shop in London I tried some scents from the Roman perfume brand Profumum Roma. Several of the scents had gorgeous sweet gourmand notes that took me back suddenly and vividly to a particular spot in Rome: the pavement outside a little bakery on one of my favourite corners of Rome, on Via della Scrofa opposite a stumpy tower with stories from the past. I've no idea why that spot stuck in my head or why I was so familiar with it - perhaps it was a meeting place? I can't remember if I've even eaten their pastries. 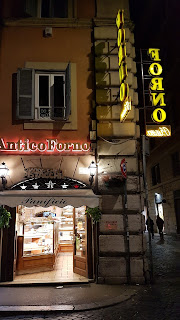 Back in present-day London I took my perfume samples home from Piccadilly wrapped in a black velvet bag and whenever I took them out I would inhale that heady sweetness of the lightest, sugariest pastries on a Sunday morning, mingling with the richer chocolatey decadence of heavier, cocoa-stuffed biscuity treats. When I looked up the address of Profumum Roma, it seemed very fitting that a shop was just up the road from the bakery. Coincidence, or not? 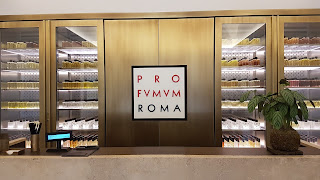 When I was in Rome in January I paid a visit - to the perfumier, not the bakery. I sampled a small number of their perfumes (always best to stick to five or fewer), sniffing the coffee beans provided to clear my nose in between scents. Then I headed off to a romantic statue-filled tea room near the Spanish steps to drink a hot chocolate and make my choice between the scents, lifting the perfumed card samples to my nose one by one to pick a favourite. Perhaps unsurprisingly, one of the two I subsequently selected had glorious chocolatey notes and now reminds me not just of Rome in general, but of that particular day in Rome, the tea room, the sculptures, the perfume chat, and the hot chocolate I drank with its little accompanying sugary pasticcini. And also of my favourite Roman chocolate shops, one in Trastevere and one in Rione Monti, and the overwhelmingly rich aroma as you step inside. 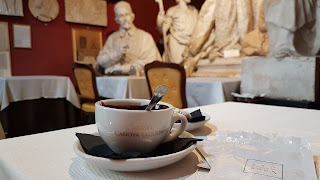 Another perfume which transported me from London to Rome was Maison Margiela Replica By the Fireplace. In the dispiriting surroundings of the Westfield Centre, this triggered instant vivid memories of the braziers on the street corners of Rome where old men from the countryside (now replaced by younger immigrants) would roast and sell chestnuts, the smell filling the crisp bright air of winter Rome. In my memory, this is one of the most characteristic smells of the city in winter and when I wear the perfume I only need to sniff my wrist to be back on the Appia Nuova or strolling through the shopping streets of the Tridente.

One of the strangest smells to me when I first arrived in Rome was the smell of lightning; not a phenomenon I'd ever noticed back home. The autumn storms in Rome were like nothing I'd experienced in England: great flashes and cracks of lightning directly overhead, rain beating down in torrents, in sheets, and deafening thunder like giants rolling boulders over our heads. This would be accompanied by a sharp smell: metallic, like phosphorous, ozone, the scent of lightning itself filling our office, like living in an ancient myth. 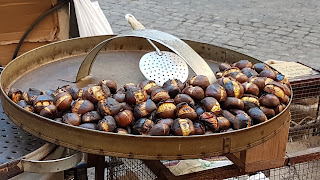 The smell of coffee and cigarettes was of course ubiquitous, though no more characteristic of Rome than other Italian cities. A cloud of cigarette smoke puffed out by bank staff as they worked, when I went into a Parioli branch to exchange my meagre wage slip for cash. The coffee and pastry aroma filling the air outside Rome's favourite cafe, Sant'Eustachio. 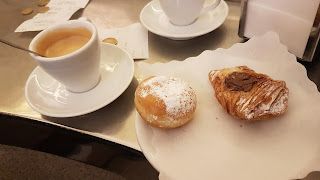 I remember the smells of football matches, of the Stadio Olimpico: the pipe smoke in my face from the older man whose season ticket placed him in the row in front of me at every match; more annoying than cigarettes as it lasted so much longer. The unmistakeable odour of lacrimogeni, tear gas. As soon as you got a whiff of it, you knew there was trouble somewhere nearby to avoid. On one occasion, at a match with children and families present, we were teargassed inside the stadium, yellowish-grey clouds seeping in the entrances and over the terrace, as we held scarves pressed over our faces, trying to protect our eyes, the Curva yelling angrily at the police. 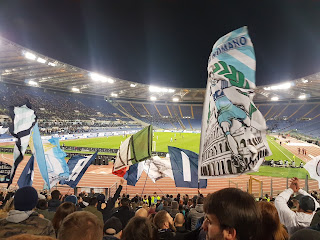 On a contrastingly floral note, walls of scented jasmine aren't so common in the heart of Rome but flourish in the residential streets near my cousin's home, and the heady white perfume reminds me of the time she showed her young daughters - and me - how to pick a tiny bloom and drink the nectar from it.

And the scent of roses: in late spring, making a Roman pilgrimage to the Aventine along with half the city, a tour of the Roseto meant bending to test the perfumes of all the beautiful roses cultivated there, across the Circo Massimo from the vast ruins of the Palatine hill. 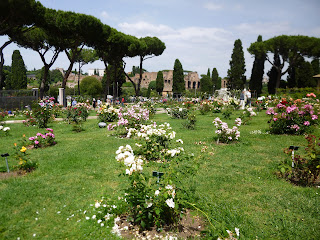 The smells I remember aren't all beautiful or nostalgic. As well as the cigarettes and the teargas, I remember very strongly the stench of unwashed human. I had never really been acquainted with this odour before; the tube trains of London never smelled half as bad. That ripe, gritty, meaty stink of a man who hasn't washed all week became an unwelcome daily ordeal on my commute on the underground Metro.

There were other unsavoury smells, too: of the big municipal bins where we tipped our rubbish sacks. The grubby street corners where elderly ladies left plastic plates of stinky food for cats. The smell of cigarettes everywhere.  Of joss sticks and cannabis on the streets of Trastevere, where young drop-outs from wealthy countries would sit begging from the poorer Romans. 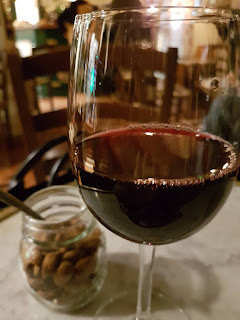 But of course there was also the food: pizzas reeking of delicious truffle, or porcini mushrooms, steaming plates of pasta with cacio e pepe, artichoke, fiori di zucca, tomato sauce, the fresh-bread smell of bakeries, the doorway of a cheese shop, a glass of red wine in winter, the bouquet of wine from the Castelli Romani, the fresh mint smell of the Mojito cocktail popular with my cousin's friends, the sharp fresh citrus of a refreshing spremuta di arancia in the summer. I remember one orange juice in particular, on a very hot day, in the garden of Villa Giulia, the Etruscan Museum, that tasted like the most perfect and welcome refreshment in the world. 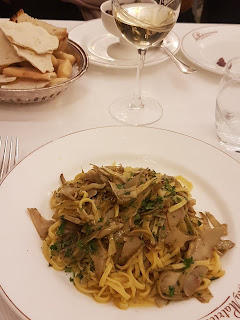 When I was a child I had no sense of smell that I was aware of. A forward-thinking GP prescribed nasal drops and a temporary dairy-free diet and suddenly I had a whole new sense. There are times when I've thought it might be convenient to be free of olfactory stimuli. But looking back and realising how big a part smell can play in our memories and in our appreciation of the world around us, I'm inclined to accept the unpleasant odours in return for the benefits. At a time like this, when most of us are exiled from our favourite places and experiences, scent can prove to be a comforting or inspiring window to past experiences and other worlds.

What Roman scents have I forgotten? The beer my local friends drank as they drove recklessly through the night (I tried to avoid lifts). Churches filled with incense and guilt. The heavy clouds of overpowering chypre as older Roman women walked past (spray it on your feet, your wrists, your elbows, you hair, in order to waft it through the air as much as possible, women were taught). The throat-tickling scent of vin brulé at the Christmas market in Piazza Navona. 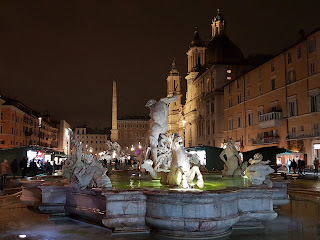 As well as forgotten aromas, there are others I must have been so used to they hardly registered. And perfumes which I can't bring to mind though I must have inhaled them often. The smell of exhaust fumes and car tyres. Of melting tarmac in the summer heat. Of a crowded pizzeria in winter.

Are there smells I've missed that represent Rome to you, or remind you of times in the city? Or aromas that evoke other places in Italy? I think of the South, or Venice, or Florence, and a whole new set of scents comes to life...

The Nesti Dante soap which started this trip down memory lane was this one: Dolce Vivere Roma. Although pleasant, it didn't compare with my favourite the glorious and more highly scented: Il Frutteto Fig and Almond (Amazon UK affiliate links to support the Italy Heaven website). My chosen scents from Profumum Roma were Battito d'Ali - light, high-pitched, creamy, sugary, orange-flower sweetness 'inspired by the beating of an angel's wings', and Sorriso, a darker scent, its sweetness overlaid with dark chocolate and a little bitter orange. In the UK you can buy the perfumes from Jovoy Paris. 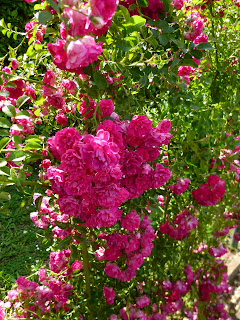 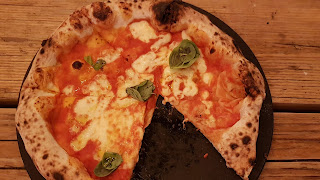 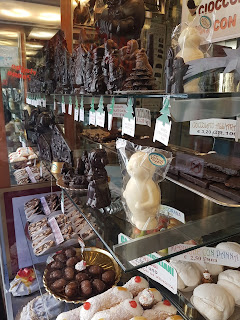 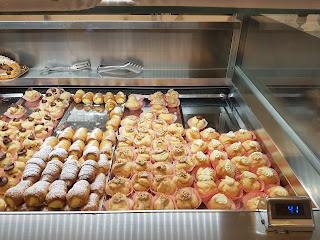 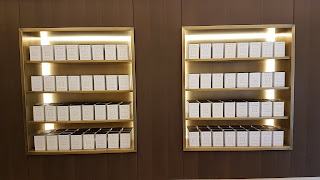