Flying in a Time of Covid Part 2: The Return Leg and Venice Marco Polo Airport.

After a fairly successful flight from London Heathrow to Venice Marco Polo last week, I had fewer concerns about the return leg.

The reality, though was a little less comfortable than the outward journey. My Alilaguna ferry journey was fine, and the skipper made sure it didn't get too crowded. The only bad point was the inadequate mask-wearing of British tourists, which became a theme of this trip and particularly my return journey to the UK.  If you follow me on Twitter you'll already have seen my complaints about this arrogance. Whatever you think about mask-wearing, if you are visiting a country which has suffered terribly from coronavirus and which has strict laws regarding mask-wearing, observed by all local people, then it is unacceptable behaviour to consider yourself above local law, etiquette and health concerns. 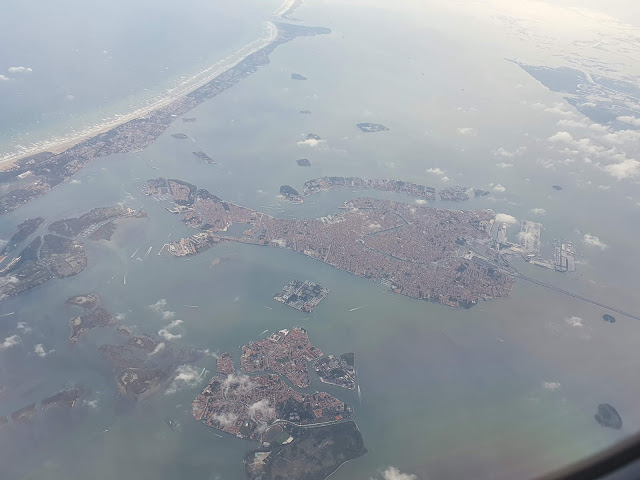 In advance of the  journey I'd checked in online, and I'd completed my UK Passenger Locator form - although there was no quarantine required of travellers from Italy, all passengers must fill in this form in the 48 hours prior to their arrival in the UK, stating their intended place of residence/accommodation for the next 14 days, and contact details.

Venice Marco Polo Airport was probably the quietest I've ever seen it. The moving walkway is still closed, so it's an outdoor trek between the ferry jetties and the terminal building. Unobtrusive temperature checks took place at the entrance. There were few travellers, and few check-in desks open. Unfortunately the queues for my British Airways flight were long, with only two desks open, and an unusually long and slow-moving priority queue. This was the first place I encountered the Most Entitled Family Ever, who went on to be a defining feature of my journey. Entitled Dad just couldn't believe that so many people had the right to wait in front of him in the queue. 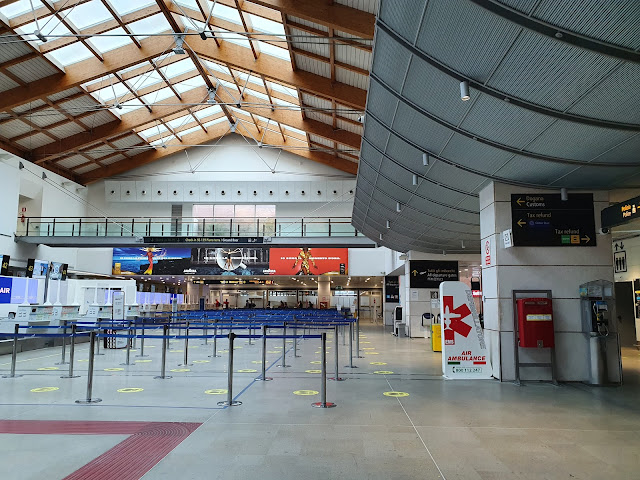 Once at the front of the queue the check-in was efficient and friendly; I was warned that the business lounge, the Marco Polo Lounge, was currently closed. This would have been a disappointment if I hadn't already known about the closure: it's a good lounge and has showers which are extremely useful on a hot summer journey; BA's Club Europe passengers and Gold and Silver Executive Club members usually have access. I was also handed an Italian one-page form to fill in with a health/travel declaration; similar to the one I'd completed at Heathrow - this was to be handed in at the gate upon departure.

Although I was told the priority lane through security was open, it was closed when I got there - the standard queues weren't excessively long, though. Airside, the entire second floor of the terminal was closed, including the lounges, restaurant and shops on that level. Downstairs the main duty-free shops and bars were open and some of the high-end stores, but other shops were still closed. Some of the toilets were closed too, but I didn't encounter queues at the ones I visited. The absence of a business lounge means no free food and drink, no views and no free drinking water for those who normally expect those things; with all passengers left to purchase their own extortionately-priced bottles at the bar, or go thirsty.

The passport checks before non-Schengen flights were done by automatic gates and again there was no queue. Inside the departure area - two UK flights and a Romanian flight departing from this section of the terminal - at least half the seats were taped off to ensure social distancing. This meant seats were in short supply, and it didn't totally work in its aim, as when one family member sat behind me, the rest of her family clustered around very close to me and Entitled Dad (yes, him), mask worn under nose and then discarded, was speaking pretty much over my head. Within this area, where most passengers were British, you would find it hard to believe we were in the middle of a pandemic. Nearly half the masks were off, or under noses or chins, despite repeated announcements. Lots of food and drink was being consumed in the public seating areas, which made an excuse for the jettisoning of face coverings in some cases.

There is one bar with food and drink after the passport gates, and one set of toilets.  I was glad of the useful charging point for mobile phones - I remembered that having completed my UK Passenger Locator Form yesterday, I would need to display the QR code confirmation on arrival at Heathrow, and had been worried about battery life.

Boarding was by airbridge, and followed the new pandemic policy of boarding by row number, the back of the plane first; of course this caused some confusion and disputes. And after a row over baggage size, the airport police were called, so there was some drama taking place. As on the outward journey, a staggering number of passengers had failed to fill in the Italian form we were given, or denied even having the form, which caused some delays, mostly for the passengers concerned.

As before, on boarding we were given our 'Personal Protection Pack' of an antibacterial wipe and a sachet of sanitising gel. I wiped my armrests and tray with cleaning wipes and noticed the passenger in front of me doing the same. Then we had a delay caused by Entitled Dad and his family, who had a plan for how the crew could rearrange the Club Europe cabin to seat them together. Having refused to give up my choice pre-booked seat I had to put up with Entitled Dad making loud rude comments in the aisle, and a lengthy stand-off where he refused to accept alternative solutions.  Once he had rearranged other passengers to his satisfaction, he took a seat in my row, mask under his nose, and I settled in for a hostile flight. As soon as food and drink appeared, Entitled Dad's mask came off, never to reappear.  I had splashed out with my Avios on Club Europe in order to guarantee an empty middle seat and avoid the aisle (a bigger infection hazard as well as uncomfortable), and I was glad I'd done this - despite the low prevalence of the virus, I would have been uncomfortable with similarly maskless strangers in seats directly adjacent to me.

As on the outbound journey, food was a box of decent sandwiches, salad and dessert, with a good range of drinks in Club Europe. 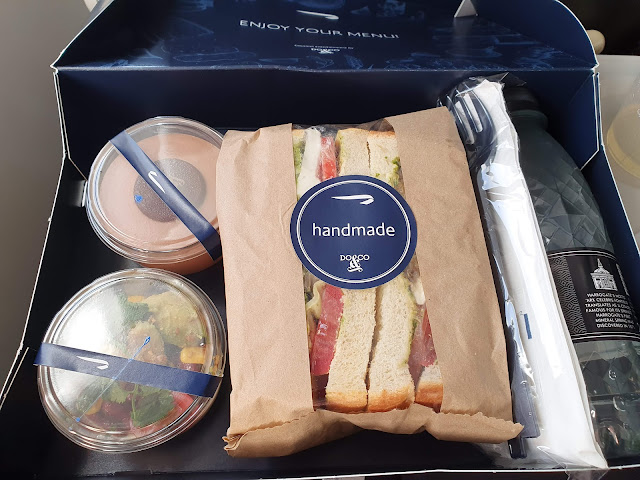 The crew were less friendly and warm than the excellent team on my outward flight. When Entitled Maskless Dad wandered around the cabin and stood in the aisle and galley chatting to the crew, they did not ask him to replace his mask as per their announced policy, nor when he was seated, although he was sitting near strangers. And when they made a bored recitation of the requirement for a Passenger Locator Form, they wrongly informed us that we had to self-isolate for 14 days. 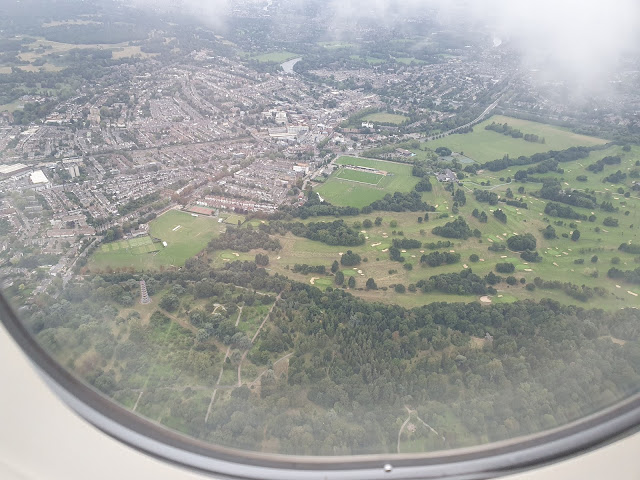 The flight itself and the landing went smoothly, with views of Kew Gardens on the descent. Heathrow's arrivals hall was quiet and there was barely a queue for the electronic passport gates. Signs around this area instructed passengers to have their Passenger Locator Form confirmation code ready to scan; I had my phone in my hand but there was no checkpoint and I found myself in the baggage reclaim hall, phone still in hand, unsure if this was policy or error (perhaps the passport check would have flagged anyone whose passport number was not connected to a completed form?).

Although the baggage reclaim area was very quiet - with one exit inconveniently closed - our baggage was extremely slow to arrive. Once retrieved, the route down to the Piccadilly line was straightforward and the lifts were quiet. Then came the interminable underground journey during which 50% of passengers weren't wearing face coverings, including a neighbour who took his mask off to sneeze. I won't declare I was glad to be have swapped Italy for the UK.

I'll write about my experience of post-Covid Venice next, but in the meantime I hope this is informative and partially reassuring for prospective travellers. As I found on my outward journey, you can't control your surroundings or your neighbours while travelling, and running some risks is inevitable. But other concerns can be addressed and exposure minimised - for example,  Club Europe prices can be competitive at the moment, and they guarantee more space around each passenger. British Airways have quite sensible policies, though I wish the crew on my plane had enforced the mask-wearing rule - especially now I'm home and reading about a flight from Zante causing an entire plane-load of passengers to self-isolate. Flying is more stressful in some ways, but less in others. Airports are  much quieter and although I had one or two longish queues and waits, the overall experience was fairly efficient. I'd recommend familiarising yourself with the latest rules and requirements of the countries at either end of your journey, the airports you'll travel through, and the airline you're flying with, so you're prepared and have downloaded and filled in any necessary forms.

If you're booking travel and would like to support the Italy Heaven blog and website and help me keep it online, please consider using the link below to make your accommodation booking, or book via the Italy Heaven website - you won't pay any extra and your booking will be covered by Booking's Price Match guarantee:

> Read about Italian destinations on the Italy Heaven website