In the last few weeks I've been exploring (and re-exploring) lots of Venice's hidden corners, while writing an e-guide to the city. There is always something new to see. Today, after visiting the Scuola Grande di San Giovanni Evangelista (open to the public on occasional dates) I noticed this old poster in Sotoportego de la Laca which advertises the local elections of 1975. The manifesto of each party would have been displayed below. 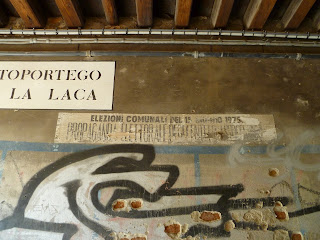 Another, much older, piece of history can still be glimpsed on a wall in Dorsoduro. This fragmentary German street-sign, if genuine, must date to the Second World War German occupation (or possibly even the Austrian occupation a hundred years earlier). It was shown to me several years ago; since then it has got increasingly illegible but you can still just about make out the word Platzkommandant. 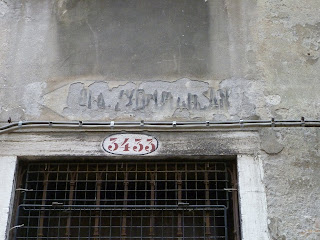 And here's another piece of wall-history - a plaque erected by Gabriele D'Annunzio, patriot, pilot, poet and eccentric when he was in Venice between daring airborne assaults on Austrian territory during the First World War. He declares the Austrian shell to be a sign of the shame of this 'perpetual enemy'. This monument can be seen in Campiello Albrizzi. 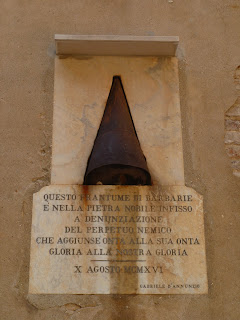 There are a number of cannonballs in Venice dating back to the 1849 siege of Venice by the Austrians. This one is embedded in the church of San Salvador, near the Rialto. 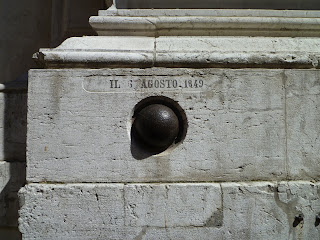 These curiosities and many more interesting and hidden spots in Venice are featured in the Italy Heaven guidebook, along with directions for walks off the beaten track.