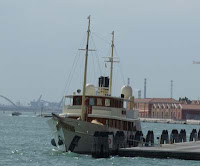 Interesting sights in Venice today included a whole team of cement-mixing lorries on a barge on the Grand Canal, pumping cement along a tube to building works by the Salute church, while a workman with a red/green bat managed the pedestrian traffic.

In a sunny break between rain showers, I walked along the Zattere and photographed Johnny Depp's yacht. The actor has been here for some time filming 'The Tourist' with Angelina Jolie. Local newspapers are pretty interested in the event, and seem to approve of Depp, who apparently walks around Venice without a Jolie-Pitt style entourage and behaves generally like a normal person. 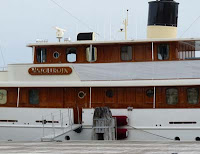 The Nuova Venezia newspaper reports that he spends the week in a suite at the Palazzina Grassi hotel, and the weekends with his family on the yacht, which has sailed here from the Caribbean. Charmingly, the name of the yacht, Vajoliroja, is made up of parts of the names of all the family members.