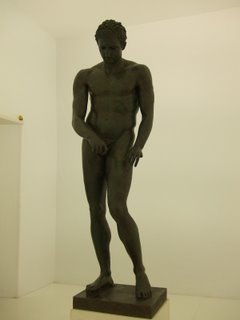 A rare surviving ancient bronze statue has gone on show in Florence. Fished out of the sea off Croatia, where he had lain for around two thousand years, the bronze athlete, now known as the Croatian Apoxyomenos, has spent seven years in conservation laboratories. Thought to be a 1st century BC Roman copy of an earlier Greek original, the statue will be on display in the Palazzo Medici Riccardi from 1st October 2006 to 30th January 2007.
> Visiting the exhibition
> Article from Minerva Magazine

I've just returned from a trip to see the statue and it is one of the most beautiful things I've ever seen. And well-presented in a plain, glowing white room. If you're in Florence this is an unmissable attraction. The rest of Palazzo Medici-Riccardi is also worth seeing, especially the Gozzoli frescoes in the chapel upstairs.