A quick note after my recent trip to Bologna with British Airways (£65 return, hand baggage only - a great deal).

Bologna Marconi Airport (BLQ) was very efficient and quick on landing - we had a bus connection to the terminal which was only about 30 yards away, but apart from that minor irritation, the arrival process was smooth, with quick and efficient passport control with EU gates which worked (a world away from the previous week's experience at Napoli Capodichino).

Once you arrive land-side, there is a long mall to the right, running from arrivals towards the departure check-in desks. This is lined with car-hire kiosks, shops and eateries - not a large number, but the eating options do look good with an osteria and a pizzeria to choose from. 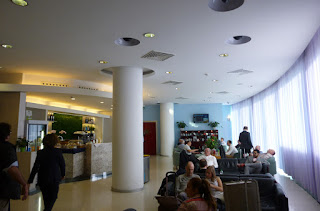 British Airways don't have a dedicated lounge at Bologna airport, but their departing Club Europe and BAEC Silver and Gold card-holders have access to the airport's Marconi Business Lounge (MBL).

The entrance to the lounge is land-side, to the right of the queue for security. The general queue was pretty long when I witnessed it, though I didn't see how fast it moved. Once you're in the lounge, there is a special fast-track security route for passengers - head through the lounge and around a couple of corners. This isn't open at off-peak times, but apparently an alternative fast-track lane is set up alongside the main queue when the lounge route is closed.  I was advised to allow 40 minutes between leaving the lounge and the take-off time, which seemed about right, if you want to make priority boarding and the first bus to the plane. As fast-track security only had one belt, there could be delays if all the lounge-eligible passengers from your flight get up at the same time.

The lounge was busy when I arrived - three to a sofa, though it calmed down later. There were soft drinks and beer in a fridge, and wine (choice of red or white)  available on request at the bar. The food offering consisted of snacks like nuts and crisps, plus small squares of pizza (which vanished quickly) and focaccia. There were sofas, charging points, tables with seating, and decent toilets available.

On the airport website you can pay for lounge access, at €28, though I don't think most travellers would think it worth the price. Priority Pass holders also have access.

Bologna is a good destination for a weekend trip or a foodie break. The convenience of the airport and its proximity to town adds to the practicality of the destination. I'll write more about Bologna and this week's trip soon, adding to the existing Italy Heaven info on Bologna. 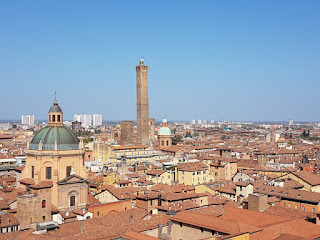 The airport is only 20 minutes from central Bologna on the public Aerobus, which runs very frequently. The bus stop is signposted to the right from arrivals. Buy tickets before boarding in the airport for €6 each, or have them included on a tourist Bologna Welcome Card which you can pick up at the tourist information desk in the airport (head right through the airport landside mall, and the desk is on your left, opposite Carrefour). Watch out for gypsies who throng around the bus stop at Bologna's Stazione Centrale, surrounding tourists and hassling them for money. The stop before the station, Via dei Mille, is the best stop for the historic centre. It's then about a 12-15 minute walk to Piazza Maggiore, the heart of Bologna. For your return journey you can board at the same stop.