Visiting the Marco Polo Lounge at Venice Airport (VCE) at the end of April (see my previous report), I was delighted to find that the new areas of the lounge were partly open after refurbishment.
*** NOTE - Summer 2017 update included at the foot of article ***


The most striking addition is a covered ‘winter garden’ terrace with low basket seating and greenery, with glass walls. This occupies part of the old under-used viewing terrace. There is still an outdoor terrace alongside, overlooking the runway and lagoon; this now has protective glass walls and is smaller. The winter garden is a very pleasant place to sit and relax or work, though I should think it will need powerful air conditioning to keep it a comfortable temperature in summer.

The lounge's new look is smarter and more expensive than previously. Whereas before there was no attempt at anything other than functionality, there are now lots of design-y touches. This is particularly obvious in the toilets, which are now very posh with expanses of of marble and mirrors. However this was let down by a lack of hooks in the four women’s cubicles, and the fact that one had a broken lock while another was out of toilet paper. There seemed to be some gender confusion among passengers over the signs, too.

Previously there were convenient shower facilities in the lounge. In April these were currently listed as 'temporarily unavailable' so hopefully showers will be reinstated when the refurbishment is complete.

The lounge is now divided artfully into zones, including the winter garden, and some working areas. When I visited most of the seating was quite close packed in the 'old' lounge area, with views over the runway. This main seating area was definitely a bit too cramped for comfort, but there is apparently another seating area which I was told would open soon after my visit. There is a 'cocoon' area to hide out in - possibly. Its purpose was unclear though it looked stylish.

As well as a bank of charging points by the reception desk, there were more scattered around the seating areas, though not accessible from every seat.


I found the lounge a pleasant place to site before a flight, with enough food to tide you over a mealtime if you're not too hungry. The changes are an impressive improvement, on the whole, with a few teething difficulties (the toilets) to overcome and another area to open up. The public areas airside are actually not too bad for most of the year, but in summer when the airport gets very busy the lounge is a good refuge from the crowds. British Airways passengers should note that BA flights tend to start boarding a bit early, sometimes by bus, and there is still a passport security check to pass through on the way to the gate (there are electronic EU passport gates as of summer 2017).


British Airways Club Europe passengers and Silver and Gold status BAEC members are entitled to use the Marco Polo Club Lounge. You can also pay for admission (more below).

Finding your way around the airport

The lounge is airside, on the upper floor. After clearing security, take the escalators near the windows (the right-hand escalators) and follow the signs. Note that BA's lounge-entitled customers are also able to use the priority lane at security – to the left of the main security queue, close to the BA check in desks.

I visited the lounge again in July 2017. The entire space was open, and now includes additional seating, a 'library' area,  little one-person booths and seating on the terrace. The food offering seems a little altered, with a choice of pastries, and little miniature aubergine parmigiane. I discovered nice, individually packaged fresh fruit salads in a little fridge at the right-hand end of the counter. You can help yourself to bottles of water, which is handy if you're travelling in BA Euro Traveller class.

There are now signs to showers, and the ladies' toilets have been improved with hooks and additional paper supplies.

The lounge is no longer open to Priority Pass members, though you can pay the airport for access, at an increased price of €40 which includes priority security screening. This is pricey, but worth considering in summer when the terminal is crowded and the security queues are very long. Airport staff were weeding out a large number of chancers from the priority queue when I travelled, and kept the line moving at a good speed.

I really enjoy spending time in this lounge. It doesn't have such full meals as UK BA lounges, but the food and drink is fairly good otherwise, it's well-staffed, the new seating spaces are excellent and varied, and you've got great views of the runway and lagoon, with the option of viewing from an outdoor terrace. 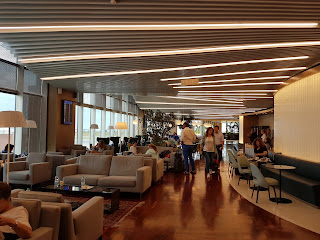 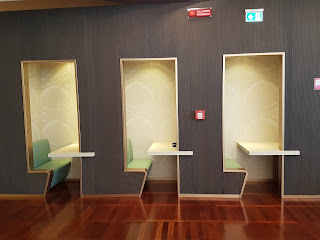 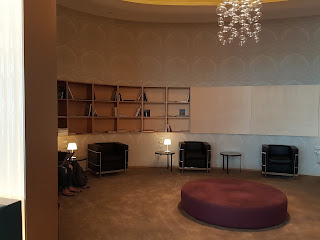