After the British Museum: itineraries for touring historic Sicily 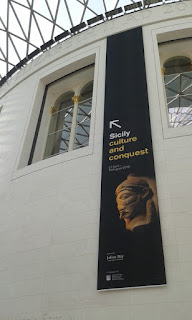 There are just a few days left to visit the British Museum's current exhibition Sicily: Culture and Conquest (closes 14th August 2016). If you've visited the museum's show, or are planning to visit this week, and find yourself tempted by the thought of Sicilian travel, I've come up with some ideas for itineraries, below.

The exhibition is a good introduction to the history of the remarkable Italian island, with photos and exhibits to whet the appetite for travel. It concentrates mostly on two phases of the island's long and varied history: the Greeks and the Normans. These are only two of the outside cultures which have occupied Sicily, so it's not a complete overview, but given the wealth of history and the museum's limited space, it's a fair choice. There are brief illustrations of other phases of history, including the final exhibit, a painting of the Madonna and Child by Antonello da Messina (from the National Gallery).

Exihibits predominantly come from the British Museum itself, from the archaeological museums in Siracusa and Palermo, and from Agrigento and Gela. The Cappella Palatina in Palermo features in the form of large and detailed photographs.

If you still have time left after seeing the exhibition, upstairs in Room 90 you'll find a large collection of Francis Towne's Italian watercolours; mostly depicting Rome and the surrounding area (this free exhibition also closes on 14th August).


If you've seen the exhibition and are ready to think about a holiday in Sicily, here are some ideas for itineraries which follow on from the British Museum's displays:

This short Greek itinerary can be joined onto the Norman itinerary below to give an overview of these two eras - as well as seeing some of Sicily's finest sights. It's easiest to hire a car to tour Sicily, but if you're patient and plan around bus and train timetables, it's possible to see the island by public transport - this is what I've always done. Palermo is the best airport to use for this tour, though Catania is also feasible for an extended itinerary.

Selinunte - one of Sicily's less-known treasures, this Greek site by the sea is large and evocative. It was destroyed in a Carthaginian siege; Sicily's history of conquest is very evident here. It's a big site so I'd suggest staying nearby. Selinunte is reached by local bus from Castelvetrano, which is on the island's rail and bus network. Salemi buses run from Palermo to Castelvetrano, and they also operate the local service to Selinunte. Lumia buses connect Castelvetrano with Agrigento.

Agrigento - the Valley of the Temples is rightly famous; this must be one of the most impressive archaeological sites in the world. The hillside town and the museum (which contains some of the exhibits featured in the British Museum exhibition) are also worth visiting; staying at least one night will give you the best chance of enjoying the town - two nights will allow for a more leisurely exploration. Agrigento is about two hours by train from Palermo - though if you have time, you can extend your tour to Siracusa in the south-eastern corner of the island.

Siracusa -  a great city break destination in its own right, Siracusa has a history as an important Greek city, an archaeological zone, and an excellent museum. It adds quite a bit of extra travel to this itinerary, so if you're planning a short holiday, you could consider leaving the town for a future trip. To reach Siracusa from Agrigento, you can catch a bus to Catania airport and then change to a bus for Siracusa - or catch a train to Siracusa from Catania station. Heading from Siracusa back north, the easiest option for public transport is probably a bus (Interbus) from Siracusa to Palermo, where you can continue the tour into Norman Sicily.

Following on from the Greek tour above, this itinerary on Sicily's northern coast allows you to see fine architecture, museums and mosaics - as well as enjoying city life, Sicilian street food and a break by the seaside.

Palermo -  a good base for a couple of days or more, Sicily's capital is the best place to experience Greek and Arab Sicily. Important sights include the Palatine Chapel in Palazzo dei Normanni, the Cathedral (don't miss a tour up to the roof) and the mosaics in the church of La Martorana. Palermo's archaeological museum has been closed for years for restoration, but does host exhibitions; when open it's well worth visiting.

Monreale - a short bus ride from the centre of Palermo, Monreale's Norman cathedral, cloisters and gold mosaics are among the wonders of Norman Sicily.

Cefalù- a lovely seaside town where you can relax on the beach, explore the old town centre, climb up to hillside ruins and admire some more amazing mosaics in the town's Norman cathedral. A good place to enjoy some holiday atmosphere after Sicily's museums and ruins. Just a hour by train from Palermo. To get to Palermo airport, catch the train back to Palermo, and then the airport bus from the station.

To get an insight into the other eras of Sicily's history, a circuit around the island's coastline takes the visitor through some remarkable sights. It would makes sense to allow at least three weeks for a more complete tour - or divide the island up and visit more than once, seeing the eastern half of the island (flying into Catania airport) and the western half (Palermo airport) separately. Sicily is a really rich and varied destination which definitely repays multiple visits. Highlights include:

Mozia, Erice and the Egadi islands - Sicily's western coast has ruins and artefacts of the Phoenician occupants of Sicily, as well as the interesting Egadi islands, the site of the sea battles which gave Rome dominion over Sicily.

Taormina - Sicily's most popular resort, Taormina doesn't have good museums, but its Greco-Roman theatre is spectacular. Important to Greeks, Romans and then to tourists from the 19th century onwards, Taormina contains a lot of Sicily's history in one small picturesque town. Taormina's on the island's eastern coast, not far from historic Catania.

Lipari - The Aeolian islands were strategically located on ancient sea routes, and Lipari was a well-off island in Greek times. The archaeological museum has an excellent collection of Greek vases and of terracotta masks.

Baroque towns - Sicily's Baroque towns, rebuilt after an earthquake in 1693, offer an attractive contrast to the island's ancient archaeology. They give an insight into more recent Sicilian history, are attractive places to stay, and are increasingly popular as holiday destinations thanks for the Sicilian TV detective Inspector Montalbano. Ragusa is one of the best destinations, along with Scicli, Noto and Modica, famous for its chocolate.