One of my my favourite excursions from Venice is by public transport down the outer edge of the lagoon to Chioggia. The number 11 is a bus-boat route which journeys all the way from the Lido island (between Venice and the lagoon), down the length of narrow Pellestrina, a fishermen's island, and then across the southern lagoon to Chioggia. It's a very unusual public transport route, with a convoy (usually) of two buses heading down the long thin Lido, driving onto a ferry to cross to Pellestrina and driving the length of Pellestrina. Then all the remaining passengers pile off, and board a boat for the last stretch. 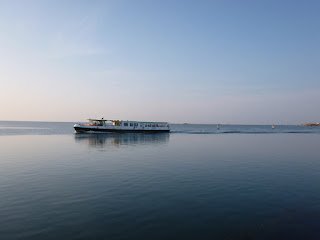 Chioggia is picturesque and low-key. There are a few sights of interest, but last time I visited I just took a stroll down the main street and most attractive canal, joined three nuns in contemplating a Carpaccio painting in a church, then enjoyed a plate of gnocchi by the canal. A wedding group posed for photos on a bridge, and seagulls pecked around the closed fish market. 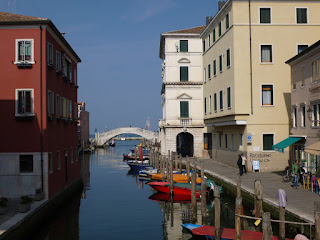 I then took an impromptu boat trip (a jaunty little boat was about to depart; I couldn't resist). It was a brief but interesting trip in the Bragozzo Ulisse, with a jovial captain and a jaunty theme song. We saw some of the fishing boats which form Chioggia's substantial fishing fleet. They mostly seemed to have names like Gladiatore and Predatore. 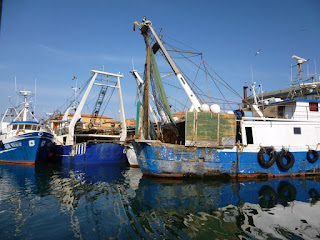 The day out got stranger on the way back to Venice. There was just about time in the late afternoon to break the journey, so I hopped off the ferry - on another whim - at Ca' Roman. Ca' Roman is an island by the southern entrance to the lagoon, made up of sand dunes and woodland. A nature reserve has been established here because of its important birdlife (Riserva Naturale Ca' Roman) .Footpaths head through trees and out onto the beach looking out over the Adriatic. Old military fortifications stick up through the sand and shrub, some of it daubed with graffiti. Trippers appear and disappear in the distance, mostly the island is empty. Leaving, I passed a cluster of teens clutching cans and cigarettes.

Ca' Roman is joined to the island of Pellestrina by the long white sea wall (i Murazzi) which has protected the Venetian lagoon from the sea since the eighteenth century.  A stone walkway heads along the lagoon side of the wall, so you can actually walk between the two islands. 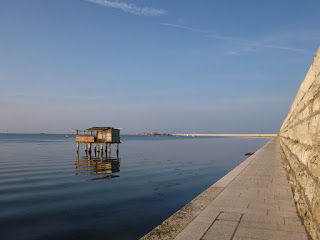 The sun was getting low when I set out. A few cyclists passed by, but mostly I was alone in a strange stretched-out landscape (waterscape?); with the long white wall curving for what seemed like miles in front of me, the lapping water of the lagoon on my left and the sea invisible on the far side of the the high white wall. The sun dropped and turned red as I walked, the lagoon turning pink broken by the wake of a passing number 11 ferry. As I arrived on the island of Pellestrina I found a man on a ladder looking over the sea wall, with a cat sitting alongside.

The Venetian lagoon has many odd, bizarre and breathtaking scenes but walking along the seawall that afternoon was one of the strangest experiences I've encountered here. 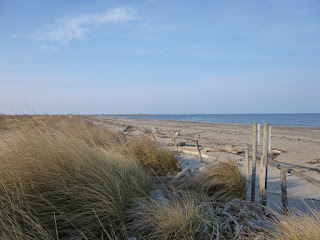 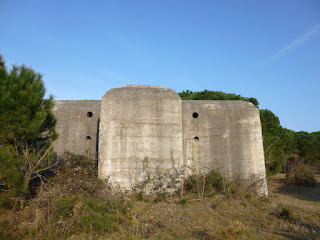 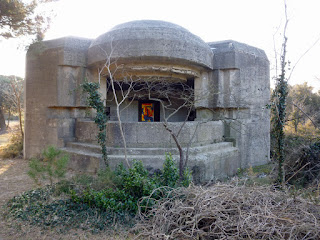 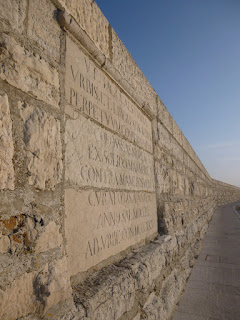 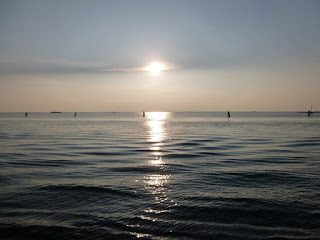