Last month I took a trip from Rome to visit Calcata, a medieval hill village which was abandoned in the twentieth century before becoming a kind of bohemian artists' colony. It's a picturesque little place which you can read about here: www.italyheaven.co.uk/lazio/calcata.html 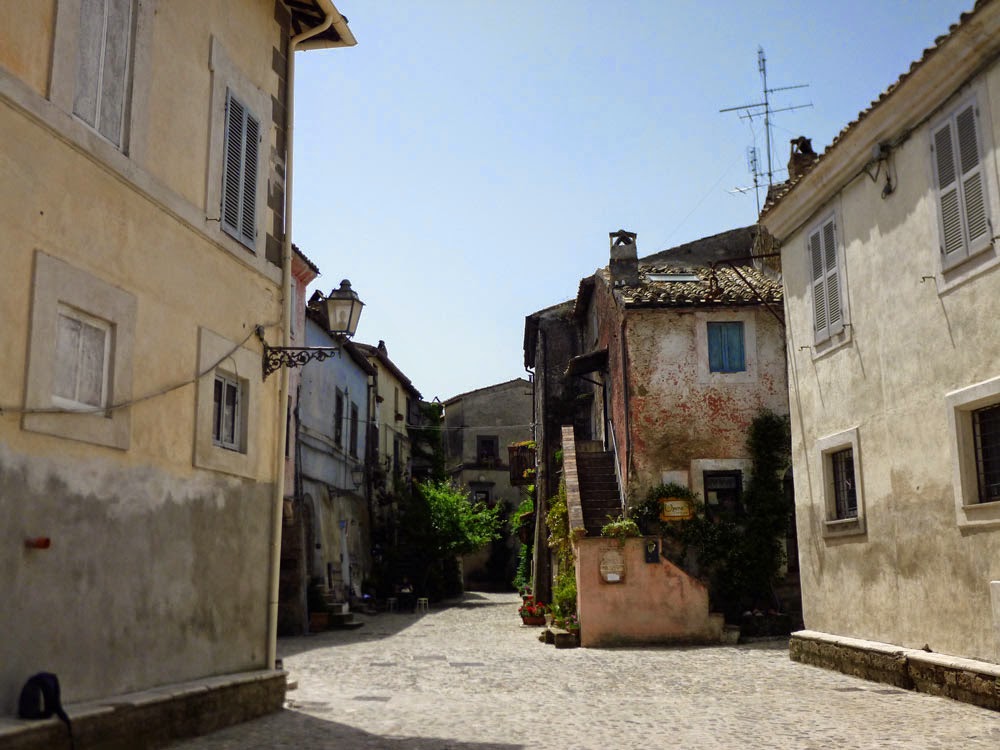 Though there's frankly not a great deal to do if you get there in the morning with hours to while away before lunch, as I did, photographers, cat-lovers and artists will find ways to pass the time. I found a viewpoint on the edge of the crags where I sat in the sun. One little dog ran around town. Countless cats prowled or dozed or dived through broken hoardings into abandoned caves (possibly hunting or possibly escaping the little dog). A kitten learned how to hunt by pouncing on its mother's tail.  Pigeons were everywhere. Calcata has around 70 year-round inhabitants, and the cats and pigeons must outnumber them massively. 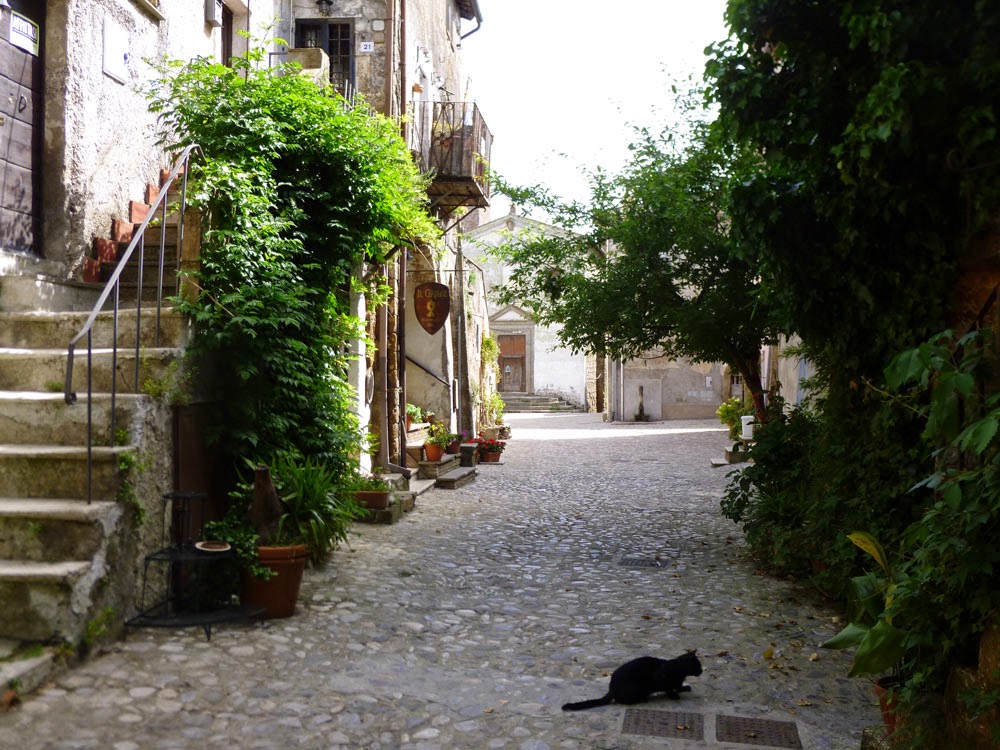 As the morning wore on, two or three other tourists turned up to wander, and businesses began to open. These are mostly artists' studios selling everything from found items to jewellery, from hand-crafted knick-knacks to paintings. A sign directed me to an oracle, who appeared to be closed for the day.

This is a charmingly eccentric place. I've visited other hill towns where the flow of tourists has led to rows of souvenir shops, upmarket galleriess and facilities for coach tours. Calcata is still endearingly ramshackle. What it lacks in careful restoration it makes up for in atmosphere. 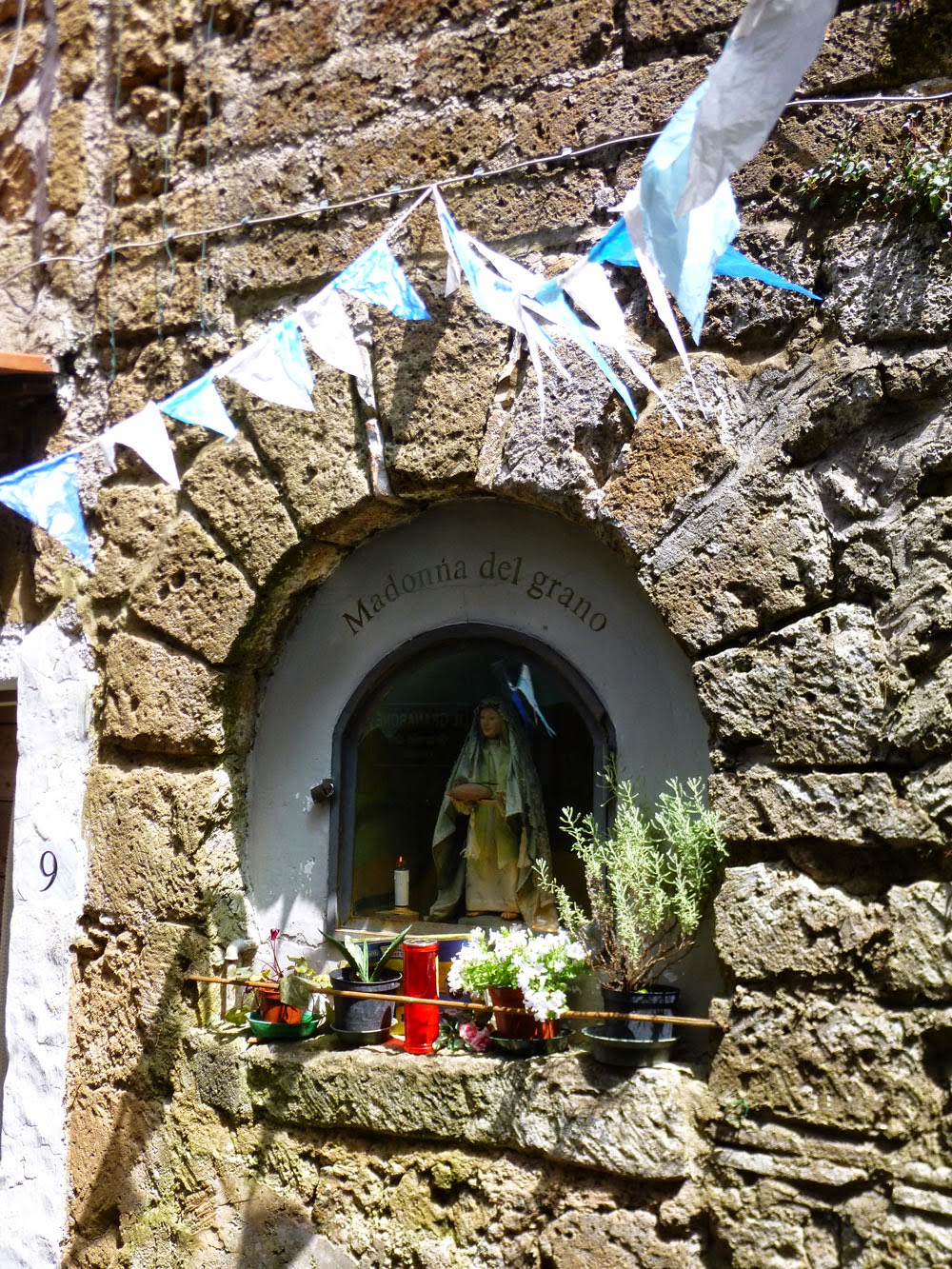 I lunched in a highly eccentric cafe crammed with art, antiques and curiosities. The proprietor - clearly a colourful character - is a film actor-turned-artist, and the walls were covered with stills from his films (including  "Lo Stallone", "The Stud") and his own artworks. The waitress put together a vegetarian piadina for me, poured a generous glass of wine and offered up some gossip about the owners of some of the village's cave-houses. In the bathroom a giant ceramic tiger stared at me, and a cluster of chairs suggest that one could invite one's friends in as an audience.
On the slope overlooking Calcata I followed a pleasantly rural footpath towards the new replacement village. There were more caves here, carved into the soft tufa rock. Some were overgrown with weeds, others were used as garages. Cockerels crowed and the air of countryside peace was remarkable; there are no cars in Calcata Vecchia and few even driving past. 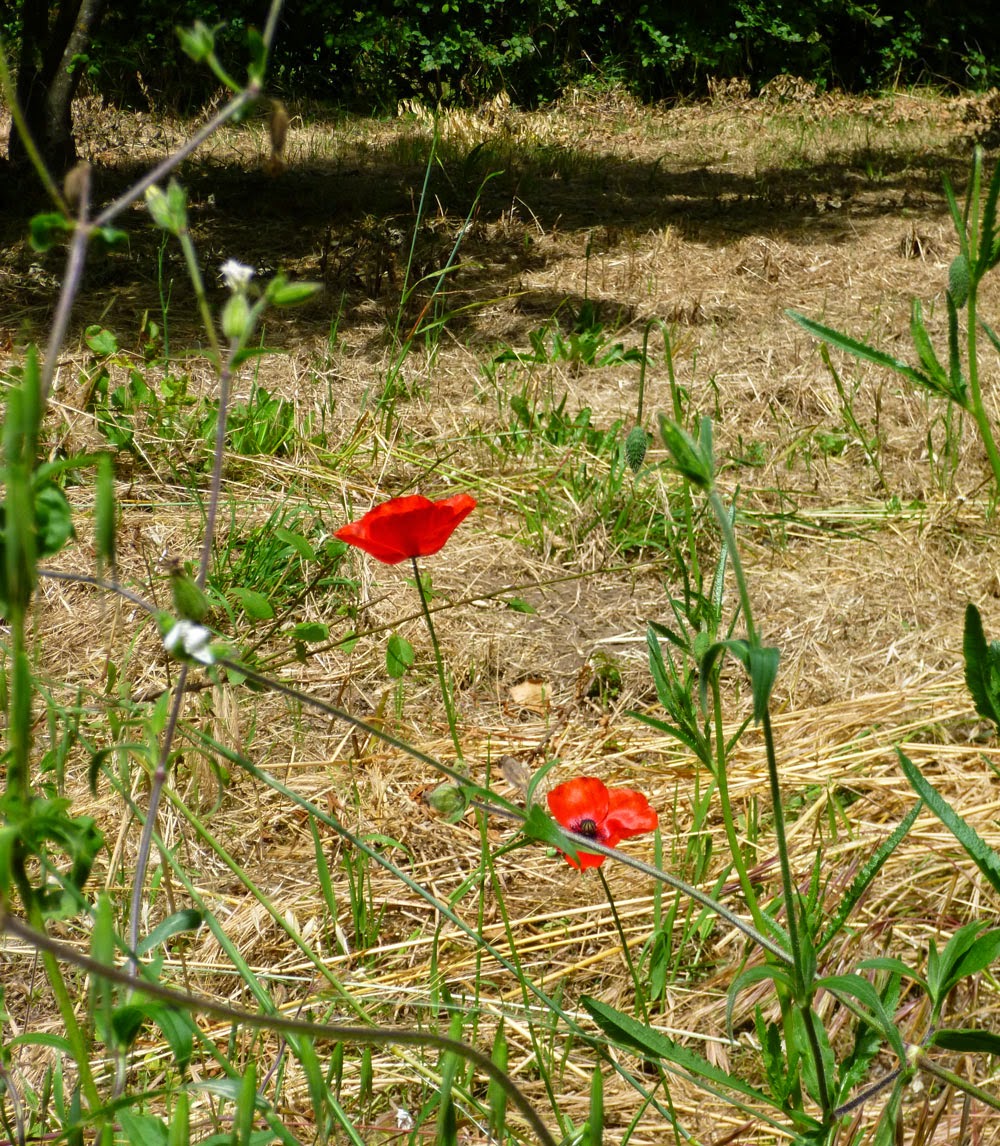 In the afternoon, waiting for the bus, I enjoyed a delicious and refreshing iced tea and a cake on a gorgeous roof terrace up steep steps from a tea room, La Sala, where two ladies played cards. I could have sat there for hours in the sunshine looking out over the green wooded valley and hills, but the bus was due. Another eccentric bathroom filled with decorations, another interruption to the card game as I paid, and then it was time to leave.


On my return journey I had to board the bus without a ticket (I literally had to sprint for the bus at Saxa Rubra that morning and didn't have time to purchase a spare). I ended up travelling back to Rome for free, as the friendly driver refused to sell me a double-price on-board ticket  on ethical grounds despite my willingness to pay ("They're too expensive," he said "It's excessive") .

My article about Calcata is here: www.italyheaven.co.uk/lazio/calcata.html 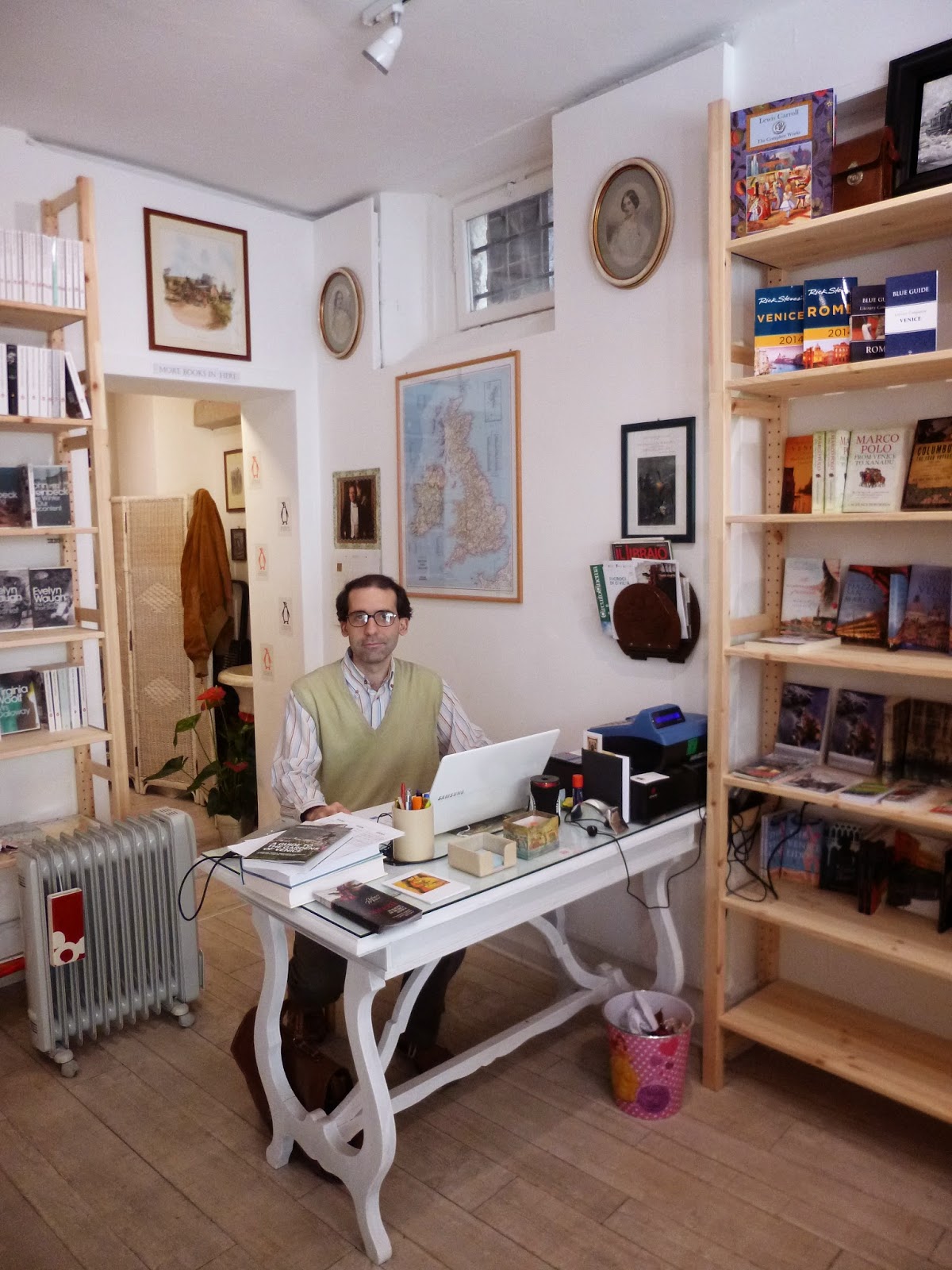 Are you a visitor to Venice looking for holiday reading? Seeking a Venice-set novel, perhaps, or an entertaining city history? Or are you an English-speaking expat in Venice looking for contemporary fiction? A Venetian eager to read English and American classics? Venice's new English-language bookshop, Wellington Books, was set up to cater for all the above, and more.

As Venice's character is continually chipped away by the tourist industry, its local shops, its book stores and its historic haunts are all too often closing down to be replaced by cheap souvenir shops, clothes shops and even kebab take-aways. It is great to find and support a new business which actually caters to the local community and contributes to the cultural life of the city.

The owner of Wellington Books, Gaspare Battistuzzo Cremonini, is a Venetian with expert knowledge of English literature and a love of English culture. The idea for his bookshop came at a time when locals were mourning the loss of the city's biggest bookstore and wondering where they could find a good range of books in English.

Wellington Books has a section dedicated to Venice with a good choice of specialist guides, including books about Venice's hidden gardens. There are literary classics and old favourites such as Tolkien and Wodehouse alongside contemporary fiction and bestsellers. You'll also be able to find books to entertain children here, including Venice-themed picture books.

As well as selling books to Venice's expats and Anglophiles, Gaspare explains that the shop has become a hub for English-language community events. You can find information here about local English-language groups and buy tickets for concerts of Baroque music organised by the Venice Music Project
The bookshop also hosts a book club, authors' readings and events.

Wellington Books is located near the Rialto, on Calle della Mandola, along the route between Campo Manin and Palazzo Fortuny. You'll pass it on the San Marco Secrets walk from the Italy Heaven Guide to Venice. 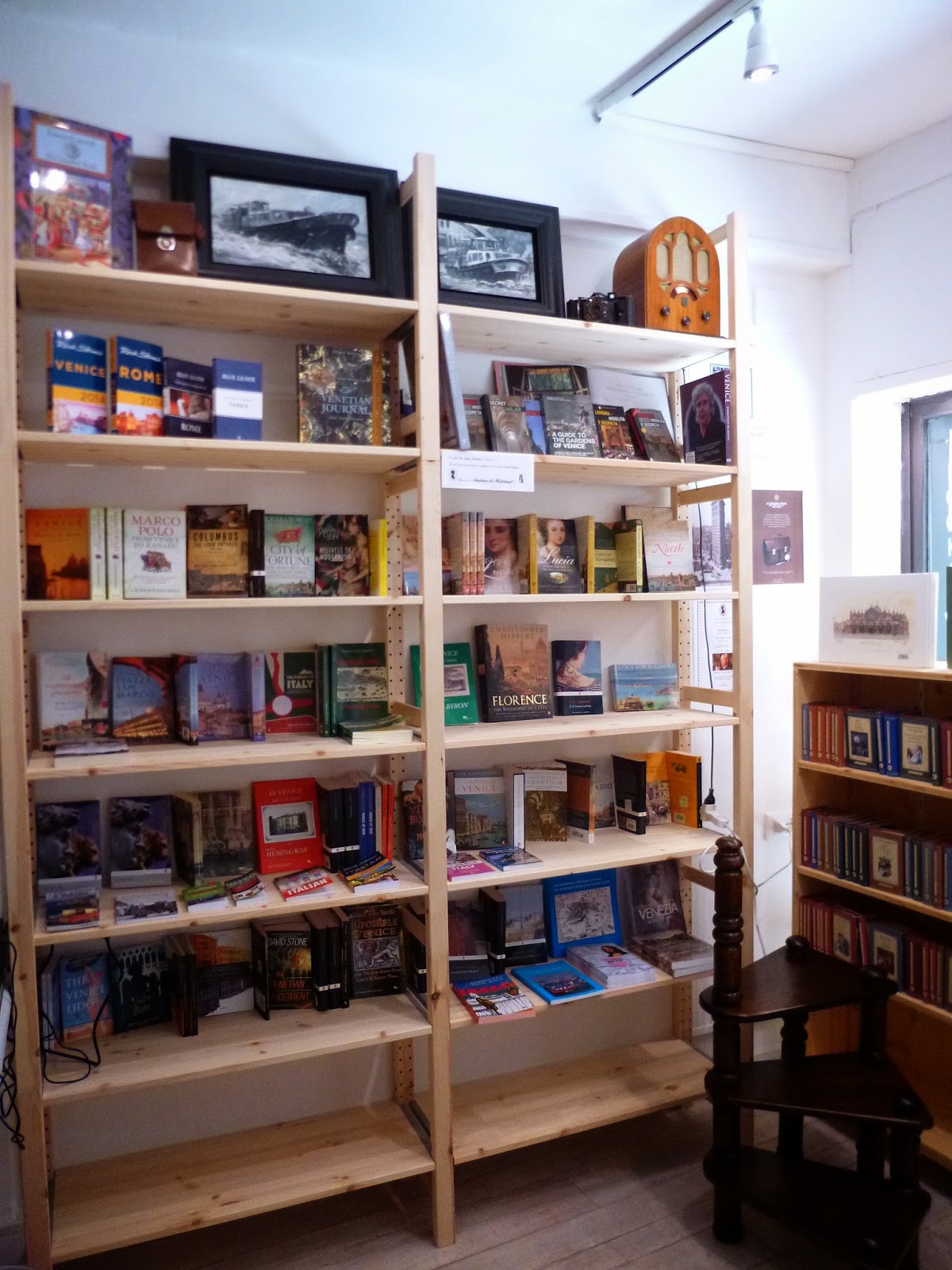 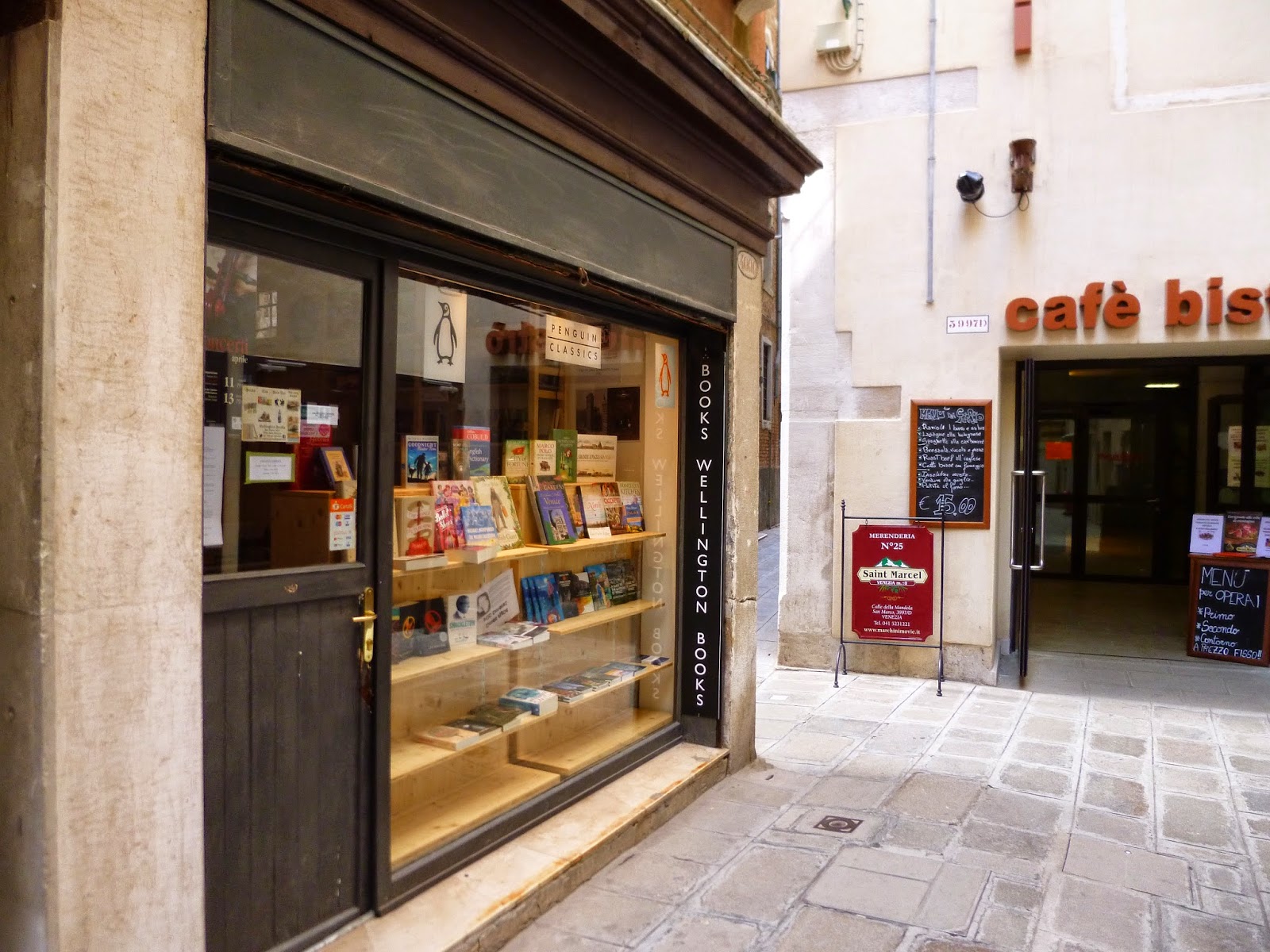 This week I've been applying Italian principles to life in England. Principally, foraging for food. The woods in the West Country are full of wild garlic (ramsons, stinking Jenny, devil's garlic, allium ursinum). We walked past masses of it on an Easter walk. So I picked some leaves (it's the leaves you use, not the bulbs) and had a go at a couple of recipes.

First I used a few chopped leaves in a leek, wild garlic and Cheddar frittata (a version of this Riverford recipe). That worked well - a nice flavour, fairly subtle.

Next I tried a very English version of pesto. Wild garlic leaves and walnuts whizzed in a food processor, with olive oil (the only imported ingredient) and Twineham Grange vegetarian hard cheese stirred in. The pesto tasted pretty fiery during the preparation process, but once mixed into pasta the flavour is milder and very good. So now my fridge and freezer contain stores of an Italian-style English pesto.

Renting a flat in Venice

This month I rediscovered the convenience of renting a flat in Venice. For any traveller planning a visit of several nights, this is almost certainly your best option for feeling at home and getting to know the city. With a high turnover of ultra-short-term guests, Venetian hotels can be busy and impersonal.

With your own rental apartment you can live to your own rhythms and get to know the city more like a resident. Apart from the convenience, privacy and 'Venetian experience' the cost can also be an advantage. For a solo traveller, you will probably pay more per night for a flat than you would for a hotel room, and for a couple there may be little difference in cost. But for three or more travellers, you are likely to pay less per person. And you can save significant amounts of money on meals and extras. I reckon that for four nights or more, the initial outlay on equipping a basic holiday rental with essentials is well worth the savings you'll make. Last week, having checked the equipment in my apartment, I spent five euros on household basics (dish-cleaning sponges, toiletries) and twenty on food (bread, pasta, cheese, fresh fruit and vegetables, wine etc.). It's fun shopping at the Rialto markets, and if you're new to Venice you'll find a bit of interest in discovering the town's tardis-like groceries and supermarkets. Once you've got your basics, you can make picnics for excursions and enjoy simple lunches like this instead of overpriced sandwiches or time-consuming restaurant meals twice daily.

Venice has some good restaurants (as recommended in my guidebook), but few of them are cheap, and the decent places are quite widely spread across the city. You'll probably find it convenient (as I did) to eat in sometimes, and plan your outings to selected restaurants to fit in with your sightseeing plans and your energy levels. With the money you save you can enjoy long relaxing drinks at picturesque cafe tables, or buy Venetian specialities to take home.

You know that great holiday feeling, when you think "If only I could live here, every day would be like this!"? You'll almost certainly think like that during an independent stay. (That is actually what prompted my move to Venice a few years ago). If it's an illusion, it's a pleasant one.

Practicalities
You can find good holiday-rental apartments on Booking.com and similar accommodation websites. These websites have the advantage of genuine guest reviews, which are very helpful when choosing a flat. I've found good flats this way, and have also rented twice (the same apartment) through Houses in Venice - I stayed in a flat which was comfortable, though not luxurious, and had this really cool kitchen-in-a-cupboard (well, it appealed to me anyway).
When I was a long-term resident I rented for years through Immobil Veneta, who let out flats for medium and long-term stays. If you are planning to visit Venice for a month or more, your best bet is a local agency like this one. Ideally, visit for a short trip first, go round some agencies (dotted around the city) and arrange a longer-term rental in person. It does really help if you speak some Italian.

If you're visiting for a short break in a holiday flat, my tip is to take some basic supplies with you, for example: salt, cleaning sponges, soap.  I take tea bags, a small packet of UHT milk and snacks for the first evening. Check if the flat includes towels, kettle, hair-drier etc. Kettles aren't widely used in Italy, so a small travel kettle can be handy. Make a list of questions to ask on arrival if you aren't given clear instructions: rubbish disposal, who to contact if you get locked out, arrangements for departure. One drawback of a holiday flat is you're unlikely to be offered anywhere to store your luggage on departure: there are left-luggage facilities at the railway station and Piazzale Roma.

And of course, if you are visiting Venice for a longer stay, the perfect way to get to know the city is through the Italy Heaven Guide to Venice.